Why No One Uses Cursive

Can you name someone under the age of 50 who has nice penmanship? I don’t mean someone who prints well, or someone who knows calligraphy — I mean someone who actually has beautiful handwriting and uses it more often than they print.  (If you do, I’m amazed.)  And here’s why. 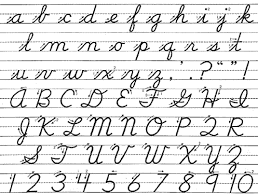 This is modern cursive as you see it in the books and posters that they use in school.

Compare it to this:

For reasons unknown to me, the style of penmanship taught in schools changed sometime between the early 1900’s and the 1950’s (or thereabouts).  It went from being beautiful and easy to use, to some kind of tortured-looking, unattractive thing that is really awkward to write with.

The antique style of penmanship was all about angles, and was formed with just a few basic types of line that give its uniform appearance and nice slant. This made it easier on the hand and arm, and gave writing a more uniform appearance.

The mysterious lowercase s and r, and that weird Q that looks a 2?  They’re a mutation of the original letters, which actually looked like s’s and r’s and q’s.  You can see it if you find a good example of antique handwriting.

So, upon making this profound discovery at the age of 14, I washed dishes until I saved up enough money to buy this reproduction Spencerian penmanship copybook set. (At the time, I think it cost about $12 — it’s still a bargain at $21.) And I re-taught myself to write. I think it was the best $12 I ever spent.

I have an inexcusable number of cookbooks (and like to experiment with them), have worked in architectural antiques, and have been sewing most of my life. I recently graduated with a Ph.D. in Apparel, Merchandising, & Design from Iowa State University. Doing household things (except for cleaning!) and hunting for antiques are my favorite pastimes.
View all posts by Charity →
This entry was posted in Ruminating, Reminiscing, & Rambling. Bookmark the permalink.

2 Responses to Why No One Uses Cursive